Polyethylene (PE) materials were introduced in the UK in 1933 and have progressively been used in the pipeline industry since the late 1930s. The properties of the PE materials have been continually developed resulting in huge improvements in crack propagation resistance and increased hydrostatic pressure resistance. Subsequently, PE pipe is now successfully used widely in areas as gas, water supply, sewer, mining, irrigation and general industrial applications.

Since the mid 1950s, Polyethylene (PE) pipe has been manufactured in Australia, initially small diameter pipes used for rural, irrigation and industrial applications. In the late 1970s, PE 80B material was introduced and in the early 1990s, PE100 compounds appeared. These are sometimes referred to as second and third generation materials.

The current polyethylene pipe grade has higher strength and toughness than earlier generation materials. PE pressure pipes are designated by their outside diameter or DN.
The SDR of a PE pipe refers to its ‘Standard Dimension Ratio’ which describes the geometry of the pipe and is the ratio of the outside diameter and the minimum wall thickness. Pipes with a higher SDR have a thinner wall than pipes with a low SDR. The SDR can be related to the Maximum Allowable Operating Pressure using the material MRS (minimum required strength) and the service coefficient appropriate for the application. PE100 has an MRS of 10.0MPa at 20°C.

PE pipes can be jointed using butt and electro-fusion or for smaller sizes using mechanical fittings. 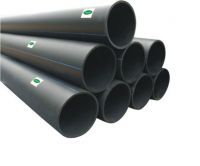